On a recent tour of Eager Park organized by the Maryland Chapter of the American Society of Landscape Architecture, U.S. Senator Ben Cardin called Eager Park, “Baltimore’s Highline,” the Highline is a world famous park in New York City that attracts visitors from around the world. He continued to reflect, “The early design of Baltimore was green space to connect communities – all communities had green space and that acted as bridge.  Over time, we built over that green space. Now we’re trying to reclaim these spaces and reconnect communities through trails, pathways and parks.  That’s what you’re doing here – you’re reconnecting.” He went on to explain the Highline comparison, “the Highline is a tourist attraction, but also represents New York, Eager Park represents East Baltimore – and it too will be a magnet. It is a magnet for families and businesses. So, I think you’ve accomplished what the original architects of Baltimore wanted for our City.” 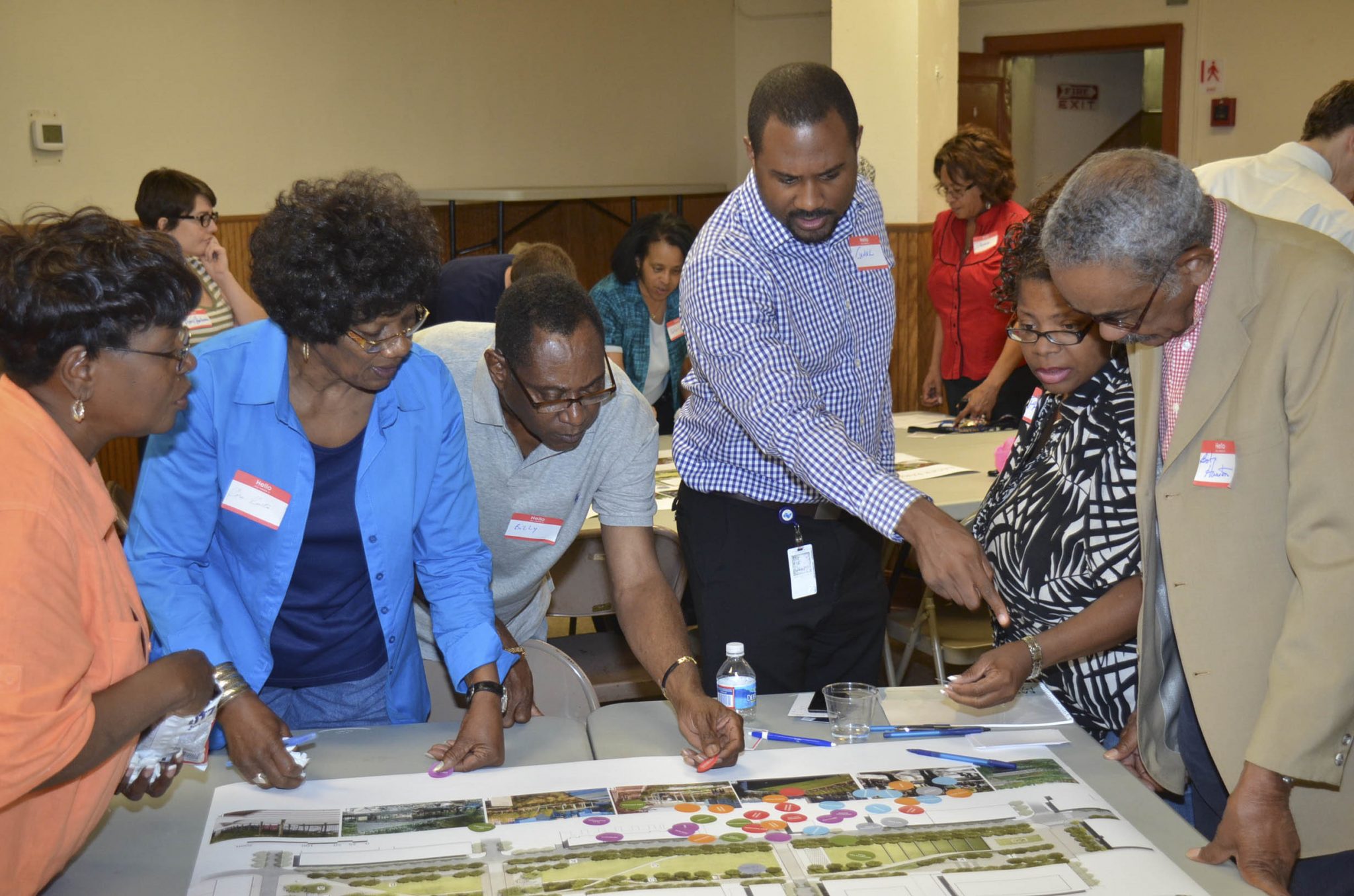 The inspiration on the park’s design is drawn from the history of the community and its proud residents while serving as an anchor for economic development.  Mahan Rykiel President Jingpeng Gu explains, “Eager Park’s design process began with robust community/stakeholder engagement that shaped every line of our design, whether symbolic or functional. The park pathways and gathering spaces are inspired by the structural and symbolic association with the archetype of the helix, which alludes to the DNA of Baltimore native, Henrietta Lacks, as well as the industrial energy of East Baltimore’s steel-making and railroad heritage. The material pallet was chosen to reflect simple, yet honest, materials like wood, steel and concrete that symbolize stability, strength and honesty, an embodiment of the spirit of the people of East Baltimore, both old and new.”

Integrating fitness, health and wellness was of upmost importance. The intertwining path system creates fitness loops of varying distances. Users can utilize individual blocks or a combination of blocks to customize a fitness circuit. The park invites outdoor activities as well as community events, including concerts, graduations, farmer’s markets, and sporting events, by providing multiple spaces for people to come together and interact, including the southern plaza, amphitheater, overlook, pavilion, lawn, playground and community garden. 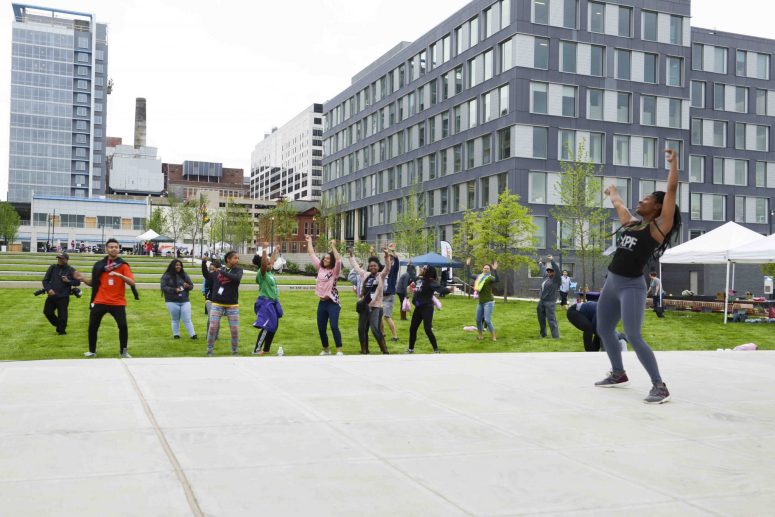 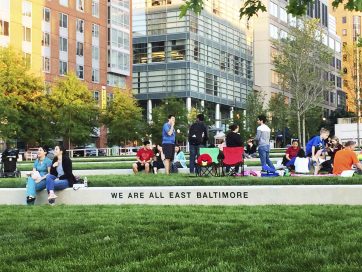 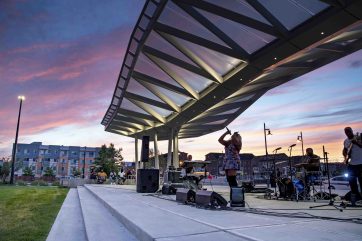 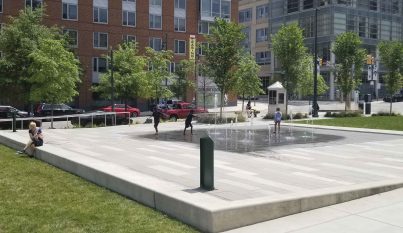 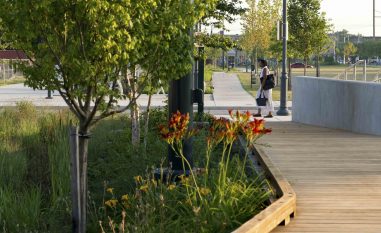 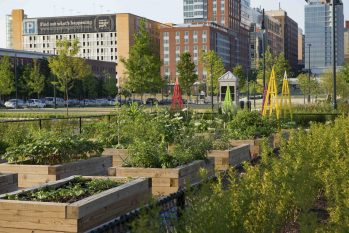 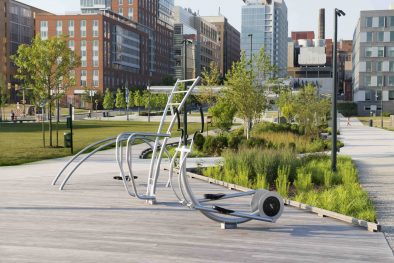 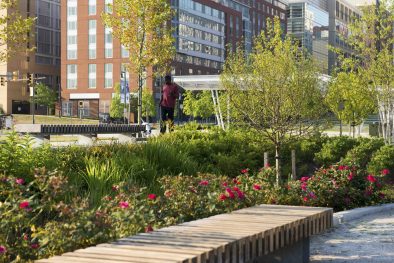 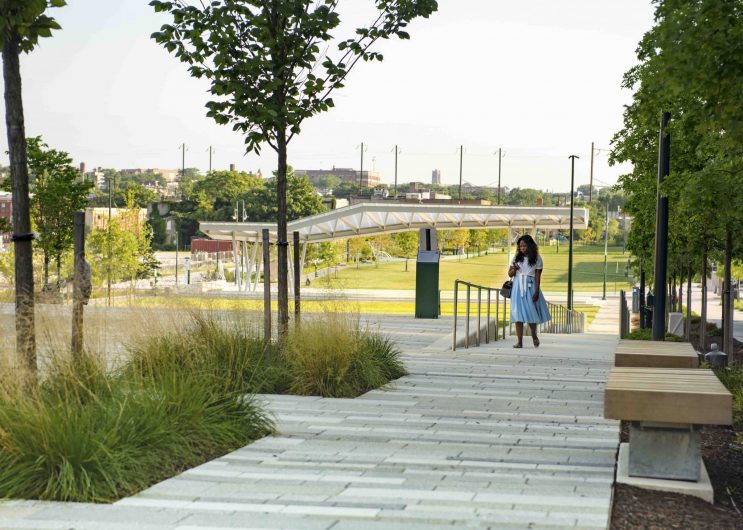 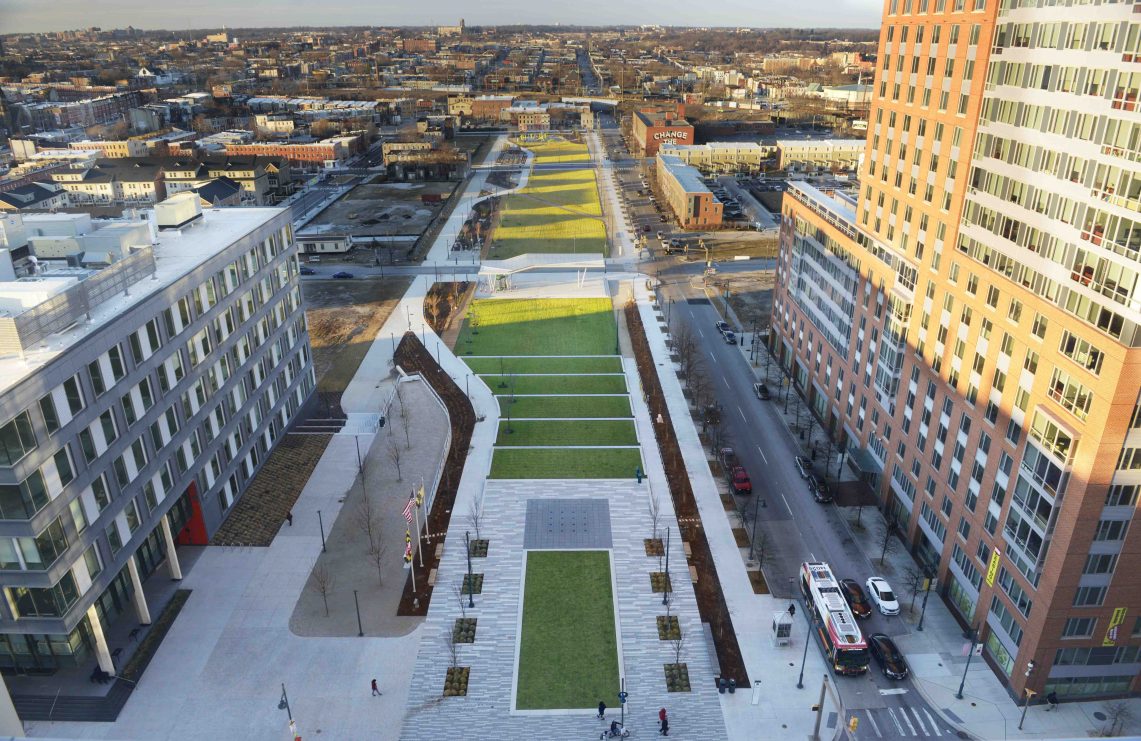 Named by Curbed as one of “8 linear parks that have transformed cities,” The community-driven design of the 5.5 acre park is at the core of an unprecedented $1.8 billion dollar development adjacent to the medical campus of Johns Hopkins University.

East Baltimore Development Inc.(EBDI) CEO and President Cheryl Washington, who manages the ongoing redevelopment, thanked Senator Cardin for his support over the last 15 years and commented, “I see Eager Park as a bridge, a bridge from the past legacy families that were here to the new transformative community that we now call Eager Park. It’s a bridge from Hopkins into the community, and a bridge from this 88-acre project to the broader East Baltimore Community where we are serving as a catalyst for more investment.” EBDI Chief Real Estate Officer Karen Johnson pointed past the tour group toward the park’s long stretch of open space lined with row homes on both sides. “Those homes are affordable workforce housing and right across from them are homes that go for nearly a half million dollars. They are neighbors and the park is where they meet and play.” 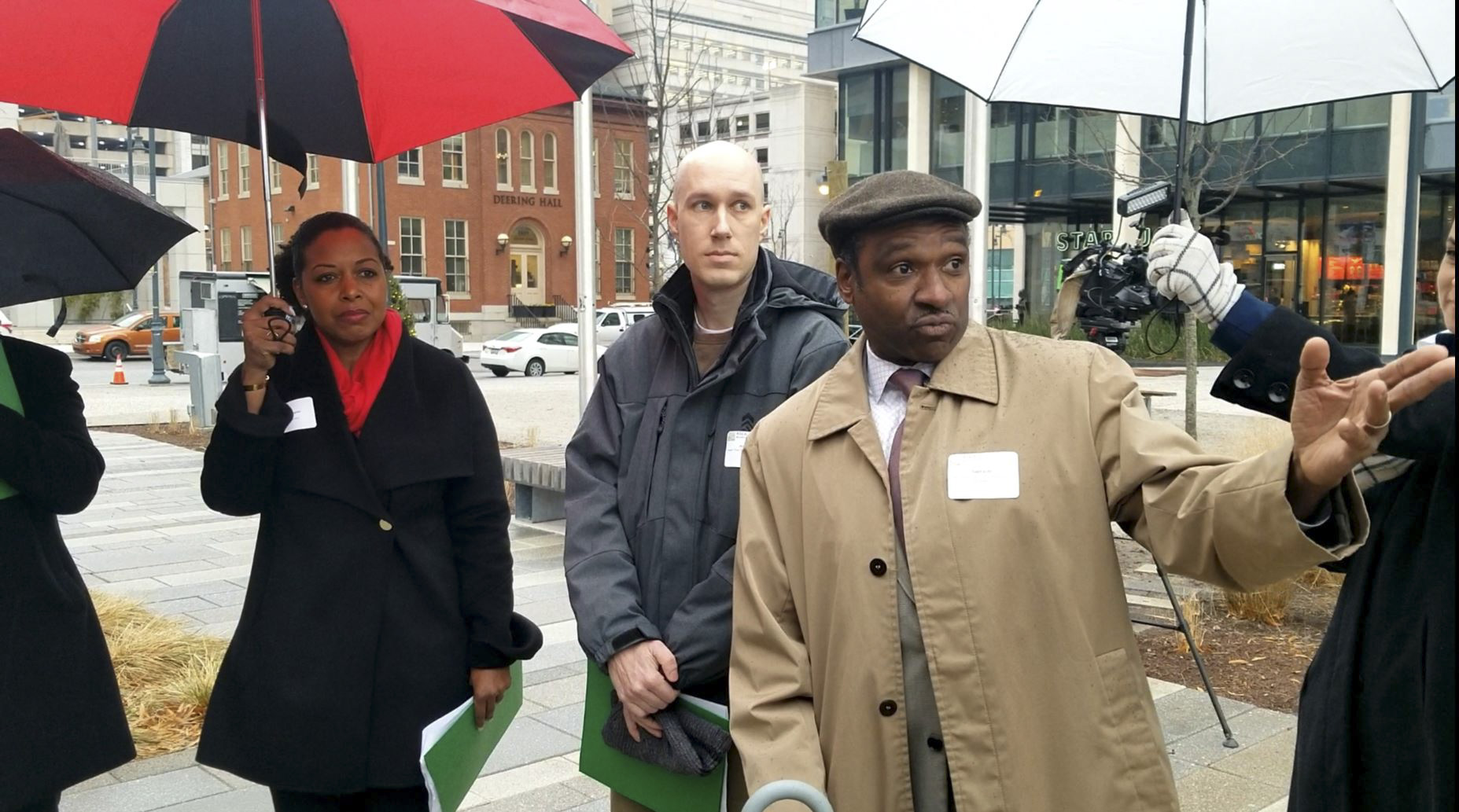 Baltimore native, Todd Scott, who grew up in public housing a quarter mile from the Park on Eager Street, shared what the park means to the community, “Thank God for my mom working hard with me, I was able to come out of public housing, go to college – I left Baltimore, and three years ago I decided to move back after thirty years. When I came back and saw the work taking place thanks to EBDI and all the partnerships – it is amazing to see how all these kids who live in the area have so much hope now.” Scott continued with a story describing the contrast from what he said was previously a drug infested area, “Every Friday there is a movie in the park – when these kids and families come out of Chapel Green (neighboring public housing) and other communities, I like to walk around and meet people. I happened to talk to one gentleman, I said ‘you have a very perplexed look on your face.’ As he watched his daughter play, he had tears in his eyes and he said, ‘I can’t believe I am in East Baltimore.’” 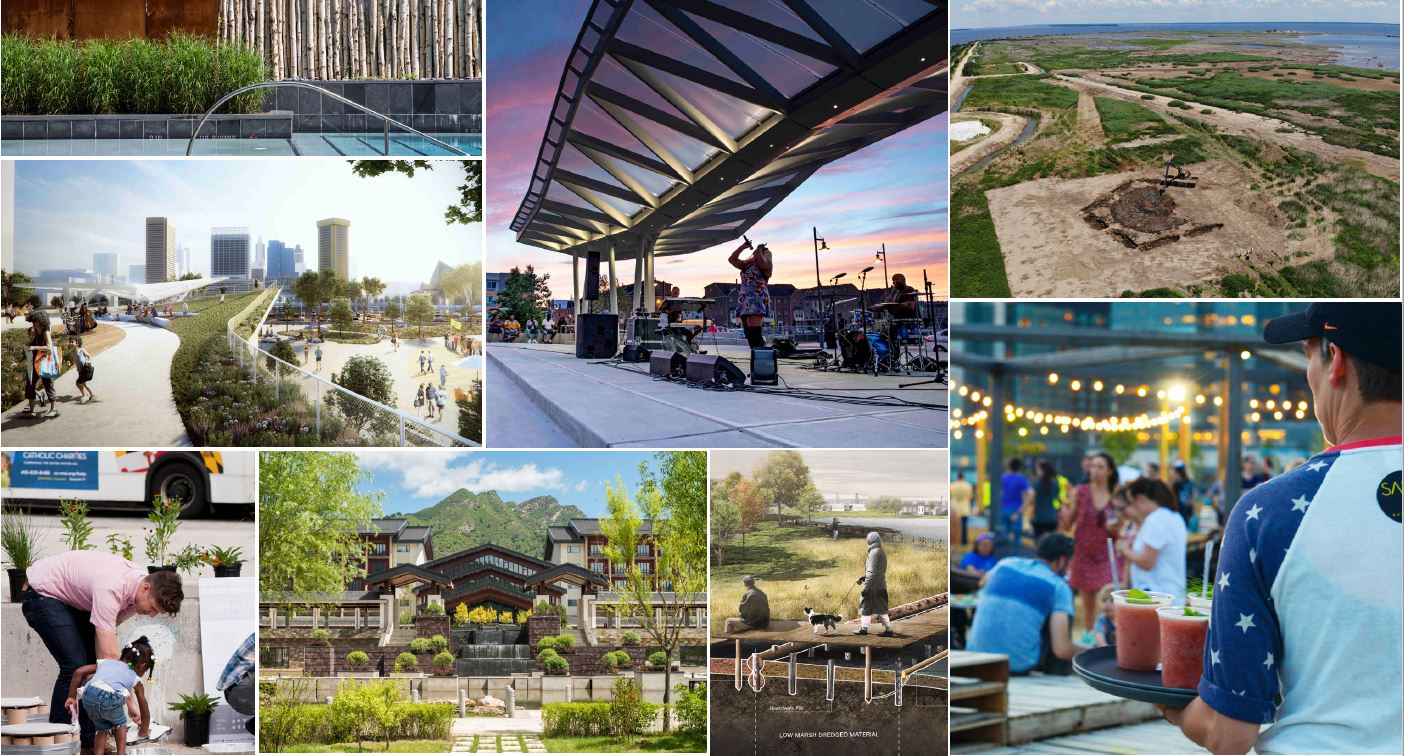